This article was published in the One Handed Cooks Magazine Issue #1. To find out more or to purchase online see the links below:

Back to School Magazine

Winter Warmers Magazine – Available in Coles and all good Newsagents

A decade ago, I set off for two years in Sweden. I arrived at the departures hall with a hastily crammed backpack and thoughts of learning a language beyond what the Muppet Show’s chef taught me. With the exception of a pair of snowshoes and an emergency allen key, for those 24 months I survived on exactly what that backpack contained.

Three months ago, I left the house for two hours. But with the load I was hauling, I barely made it out the door. It was the first day of taking sole responsibility for looking after my first born. I had three bags filled with nappies, wipes, sun cream, Sudocrem, two outfit changes, a jacket for the cold, a hat for the sun, a rattle, a change mat, a leaking sippy cup, newly-limp Saos, a Russian doll-like bag full of tiny snap-lock packages containing even tinier amounts of lunch, a shade cloth, a rain cover and a pocket full of emergency numbers. And, somewhere in amongst it all, a one year old in a pusher.

Hannibal crossing the Alps had less stuff. And I’ll bet Hannibal didn’t forget a spoon and have to serve yoghurt and puree with his fingers, like I did. Still, an hour and a half later, I was chuffed. I had survived. And so had the little one. OK, so she was covered from arm to shoulder in prune juice and that made her upper limbs as tacky as flypaper and she was crawling around with half a dried-out Sao araldited to her behind, but she was alive. ALIVE! I took a photo and texted my partner. “Yes, she is still with us. See!”

I’m marginally better these days. (There’s a spoon carabinered to my jeans AND the pram). But those first moments of Daddy Day Care were pure over-planning and under-delivering. With the cool, self-justifying eye of hindsight, it was just after an election had been called. I had clearly absorbed the well-worn political plays of cynical vote buying. My platform was a streamlined, accident-free future sloganed: “No new stacks.” And now, as Father-elect, I had to live up to it. Even if that meant dragging behind me a skip-bin’s worth of contingencies. (Daddy Day Care, incidentally, seems a total misnomer. If it was a place where dads could get together and play in a sandpit and sleep at lunchtime, then maybe I’d understand.)

The thing is, it wasn’t as though I’d never taken care of Eloise before. Hell, I’ve looked after her for hours by myself. Not a problem. OK, she may have been asleep for the night while I watched a couple of games of footy but something might have happened. And I would have had to call for help.

Still, there is something about suddenly being given untethered control of a toddler. Above all, it’s unnerving. Mostly because they have a habit of staring or screaming at you until you do what they want. Only they can’t tell you straight out what it is, so until you learn that that cry means any of: water/milk/no/yes/I’ve-slammed-my-fingers-in-the-drawer/I-want-to-go-outside. Over time, I began to differentiate between the cries. And take her outside no matter what and point to the passing cars. It became my suburban parent’s equivalent of pacifying jazz hands.

The one thing I did pick up quickly was the I’m-soiling-my-pants look. At first I thought she’d entered a zone of zero atmosphere, much like the scene in Total Recall: her face went crimson, she stopped breathing and her eyes looked like they were being dragged from their sockets. A second later, though, and I began to wish it was me in the zero atmosphere zone as the eye-watering miasma drifted over me.

The other thing I learnt was to accept that we all have flaws. Despite all my efforts, I’d always forget a critical item – a nappy, a pair of shoes, wipes (the single worst thing to forget). Once I carried her to the car and forgot to put the pram in. Which made shopping as much a workout for my lower back as it did for my credit card. After three months, I’d come to realise a new Universal Law: prioritise friends with nippers. And no, not because we’ve got more in common. It’s far more basic than that: like the Swedes, they’ve got the things I’ve forgotten. 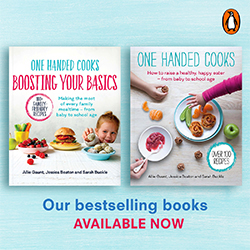